From the Editor-in-Chief’s desk: Your September 27 briefing

The top story on Page 1 of The Fiji Times’  edition for Tuesday, September 27 is on NCDs. We learn that one every 2 seconds is the global death rate of people under the age of 70 who die from NCDs. That’s according to the World Health Organization. And in Fiji, WHO said 84 per cent of all deaths were caused by NCDs.

Here are some headlines inside:

THE Social Democratic Liberal Party (SODELPA) provisional candidate Tomasi Vakatora has withdrawn from the party because of health issues.

RATU ESAVA NABUTA believes engaging in politics is one of the greatest acts of public service anyone can do.

MANY companies do not prioritise investing in their own human resources and this results in job insecurity and dissatisfaction in the workforce.

FIJI is the first country in the region to tackle cigarette smoking head-on with the establishment of Tobacco Cessation Service hubs in all divisions, says World Health Organization (WHO) Team Leader Pacific NCD’s and Health Dr Tomo Kanda.

EMPLOYEES being unmotivated and showing lack of engagement are the top two poor attitudinal traits in the workplace.

SEVENTY per cent of workers under an apprenticeship scheme in Fiji have disciplinary issues that are attitude and behavioural related, says the 2022 Report on Industry and Community Discussion Forum (ICDF) released by the Fiji National University’s National Training and Productivity Centre.

Aynone found aiding or harbouring escapee Lemeki Tupali will face the full brunt of the law.

THE Fiji Intelligence Unit (FIU) says lowering the cash transaction reporting threshold from $10,000 to $5000 will assist in the detection and profiling of illicit wealth and asset recovery. 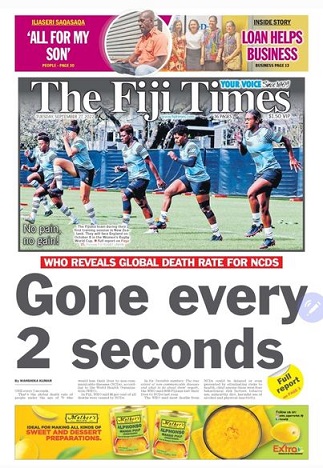 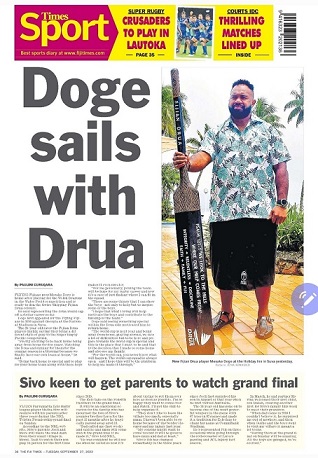 THE Rooster Chicken Fijiana will “do the little things right” and trust that the processes will take of itself during the women’s Rugby World Cup, says backline coach Mosese Rauluni.

THREE debutants have forced their way into the Fiji Pearls squad for the PacificAus Sports Netball Series to be held on the Sunshine Coast in Queensland, Australia next month. Coach Unaisi Rokoura named her 15-member squad to prepare for the series with the bigger target solely on the 2023 Netball World Cup in Johannesburg, South Africa.